Hey Dave there is a cable car? Yes I know I, but there is also a path to the top & very scenic replied. Dave, that is 2530 steps! 853m ascent, are you crazy? No I’m not, it’s a great walk by all accounts, let’s do it? But that is precisely why they put in a cable car Dave came the voices in my head again! I had to silence the voices somehow and thought the best way to do that was to start walking!

Off down through the car park past the taxi rank and to the entrance of the track to the left, an information board had several messages about staying safe and forest fires etc but nothing about the condition of the track or what to expect. I heard some mumbling in the back of my head somewhere about walking the trail but that subsided, the trail was fairly flat to start all 100m or so, lovely pine forest, the track was soft underfoot, combination of soil and pine needles but then a sudden upturn the track started to become a slow ascent, not so steep but it got the heart pumping.

Large stone steps interspersed by trail but flanked by large pine trees, well-marked with Grouse Grind at the start and junctions and later by distance markers 1/20 2/20 etc the track rocky and a notice to hikers on a tree mentioned exclusion of liability, but I didn’t read it as we would be “OK” we’re experienced hikers aren’t we?

Soon we found the trail winding and zig zagging up, more steeply & wide wooden steps interspersed by rock hewn steps, some needing a big push to step up although well worn and very steep the track was in very good condition, the weather was sunny and made a perfect day for the climb, sun filtered through the trees which were straight as an arrow up to the sky, we finally came to the half way marker, huffing and puffing by now, pouring in sweat and happy for a breather whilst taking a photo. Then some wooden stairs up the hillside or should I say the mountainside, steep and again some big steps required, up they went then zig zag then more steps looking up we could see blue sky at the top of the ridge always a good sign we are getting closer to the top, then the steps got steeper again interspersed by a gradual slope on a zig zag, legs were ok but breathing heavy, huffing and puffing, sweat pouring off and yet more steeply up, we passed many hikers going up some struggling and not motivated at all to reach the top, why did they start in the first place! 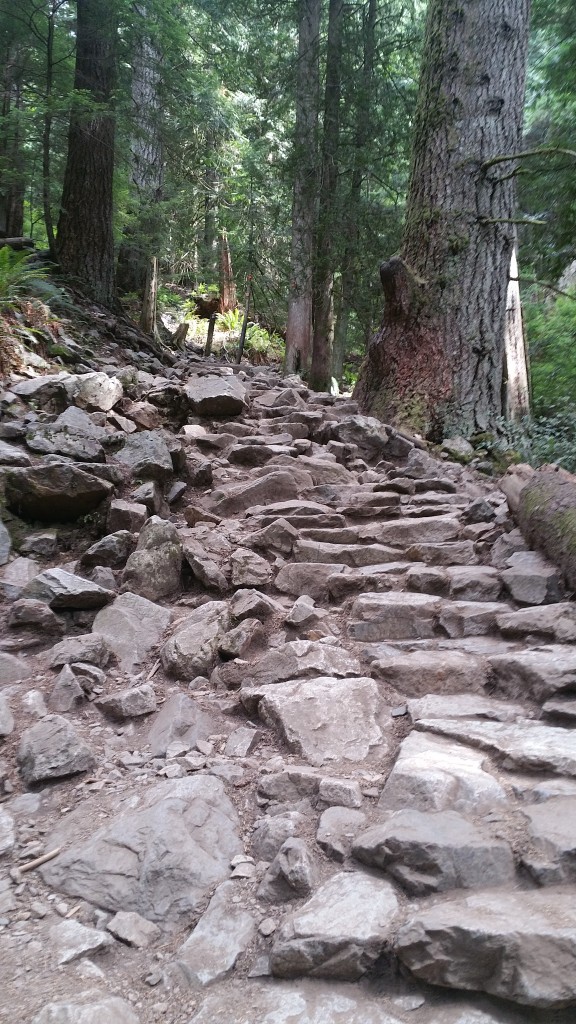 The track was now very steep, steps were hewn from rocks, some through tree roots and others made from timber, handrails were whole tree trunks some curved at the bottom where the young tree was growing out of the side of a mountain and had to change direction to grow upward towards the sunlight, other hand rails were rope making it easy to pull yourself up the steps.
About ¾ the way up we saw a Chinese family with a young girl about 6 or 7 years old in a dress, clambering up with plenty of motivation from her family, other young kids were doing it too and the young experienced hikers raced by us as if we stopped for a rest!

Then we heard a helicopter taking off so new we were getting closer to the top and our finish, what was there was anybodies guess we had no idea, finally we saw the track widen and was total rock, we could see a roof top in the distance and new we were nearly at the top, then suddenly the track opened up through a clearing and the chalet, a large balcony bathed in sunshine had people sitting in the sun and drinking cold beer, hey what time did you start? They shouted, We did it in 1 hour 40 min we replied but enjoyed every moment as we did not rush, believe it or not the last bit to the bar was up more steps!

These were much easier to negotiate as at the top, a bar was offering a cold beers to sit and relax on a balcony bathed in sunlight overlooking the track we have just climbed and valley below, perfect ending!

After relaxing over a cold beer enjoying the warm sunshine we paid for chair lift tickets up to the peak, the track to the top was a ski run so a gravel wide track and a little boring, we found this out for ourselves as we walked down! The chairlift to the peak was just like any other, nice views back to Vancouver though and over the top of the trees, a couple of small gullies to ride over which might be a little nervy for those that do not like heights like myself.

At the top some nice views and worth a wander around, some big zip lines that are paid as a package zip across the valleys, walking back down the ski run a wide gravel track to avoid the chair lift down (don’t tell Yen) we visited the bear habitat a housing for two orphaned grizzly bears, fortunately for us they were out foraging for food and headed down to the stream for a drink nice photo opportunity, in the background the noise of a lumberjack show could be heard but we had to head back down for the last shuttle bus to Vancouver at 6pm, we waited for the next cable car so we could get front row position for the best views, standing at the front of the cable car as we left the ooh’s and aah’s from everyone as we dropped down over the mountainside with a slight tummy churning drop 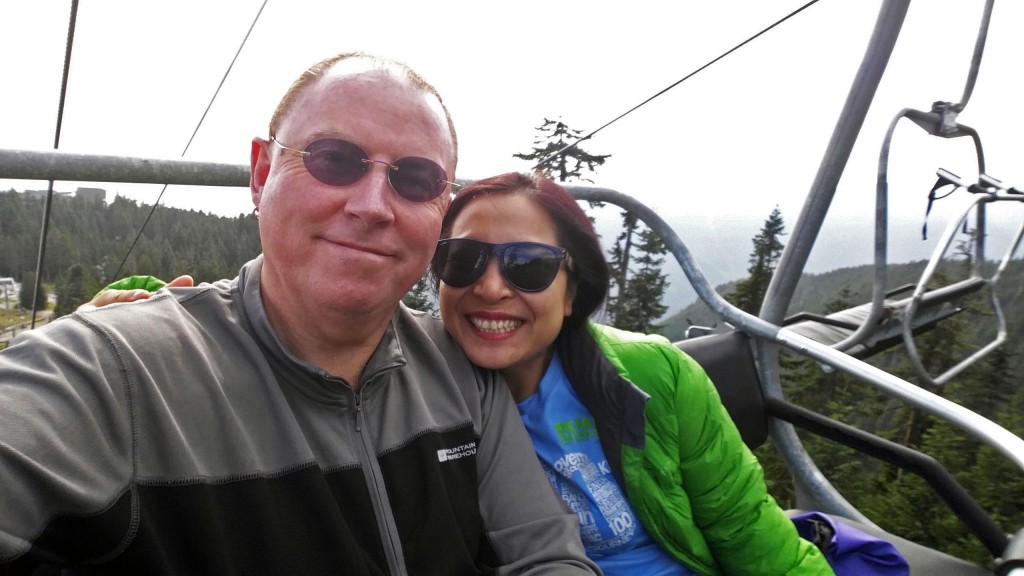 Grouse Grind: Dave and Yen on the chair lift

Getting there: We hopped on the free Grouse Mountain shuttle bus departing from downtown Vancouver, (Terminal Station) they did not ask us for tickets but if they did we would have said we want to climb the Grouse Grind and cable car to the peak, then cable car all the way down to the shuttle bus again cost at 24 Aug 2015 was CAD$17 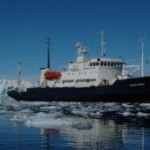 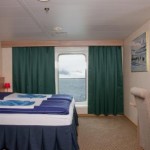