We left Sydney 11:30am Christmas day hoping for little traffic and fairly easy drive to the Round Mountain trail head, 600 odd kilometres from Sydney, driving down the M31 we saw big black clouds on the horizon and soon drove into heavy rain just after Goulburn, then hail and a quick dive to the road shoulder and squeezed up under a tree for protection from the hail bouncing off the bonnet and roof of our ute.

Our two cars we separated on the drive so I sms Mitch to meet us at Cabramurra, a ski resort village in the Snowy Mountains, a nice lookout at the top of the village and their we waited, and waited, then waited some more and getting slightly bored of the views we decided to drive on to the trail head and as we left the village their they were! Off to the trail head a few kilometres down the road towards Khancoban, fairly large car park and only 1 car already there. We put on our boots, ready our packs and then set off down the fire trail to Round Mountain Hut our overnight stop, as we walked down the fire trail around 2km then a turn left down the steep trail onto Farm Ridge Fire Trail about 700m and our first night in a Kosciuszko hut! Our first introduction to the much maligned March flies, as if the small flies were not bad enough these critters were enough to drive a sane man mad! Big noisy, and annoying, left on your leg for a few seconds or more and nip ouch… 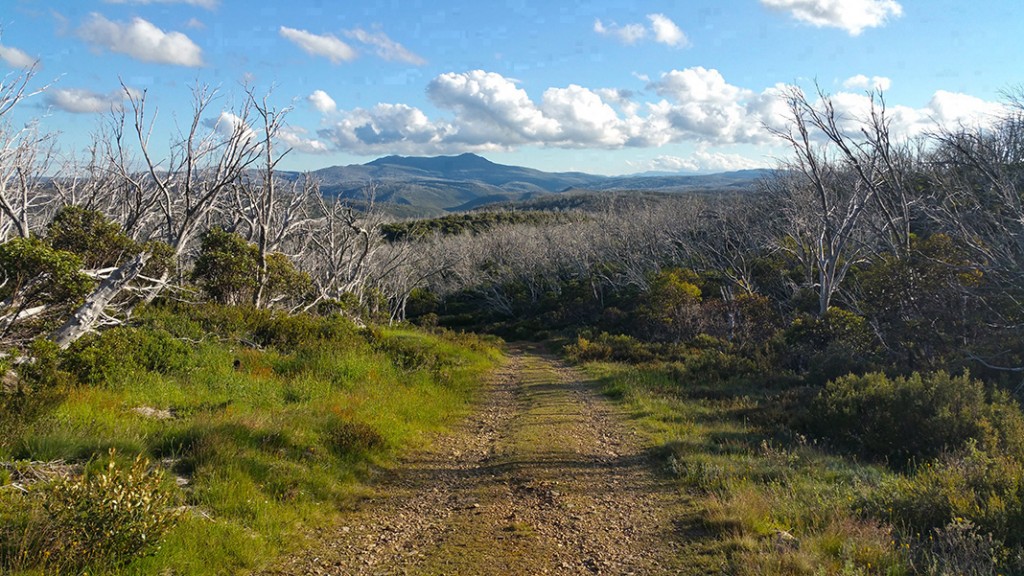 We arrived late around 6:30pm, the sun was high in the sky we pitched tents and admired the cute little hut, 1 hiker decided to sleep in the hut the rest of us camping, we enjoyed the view from the loo that had stable doors allowing fantastic views down the valley whilst sitting on the throne, tents pitched, loo tested it was time to light the fire and cook up dinner on our stoves, I boiled some water for coffee, although Lance was first with the brew as he slept inside the hut, no tent to put up but then started to complain he could not remember where he put his coffee cup, inside he searched, then outside, paced up and down the hut asking all of us if we had seen his coffee cup, questioning Yen is that your cup are you sure it’s yours? Yes replied Yen and off Lance goes in search of his elusive cup, finally after much frustration Lance demanded Yen check her backpack for her cup as he was sure the one she was using was his, sure enough with much laughter all around except from Lance out comes Yen’s cup!

Coffee and dinner sorted we relaxed around the fire nattering about our adventures in the past, future and what was awaiting us over the next few days. We awoke to a beautiful blue sky and glorious big sky welcome in Jagungal Wilderness Area, the air was crisp, due made the grass a deep luscious green, wildflowers blossoming and views down through the valley and across to Mount Jagungal itself. We left by 08:45 a bit late but happy we only had around 14km walking ahead of us, a gently down hill trail led us through the valley twisting up, down and around the hills, through pockets of wild flowers bursting with colour, creaks trickled with clear mountain water and birds sang in the sunshine, our chatter was full of humour and soon arrived at Derchkos Hut our 2nd night in Jagungal, a cute little hut not iron but wood cladding, pot belly stove inside and three small rooms, again quickly pitching tents we readied lunch and planned for our climb to the summit of Mt Jagungal 2066m which dominates the scenery of the park, we took a jacket, water and snacks only, clear blue skies showed not a hint of rain or change in weather so off we set 8 of us down the same trail we will be walking tomorrow before the turn off up to Jagungal, 9km return climb however we missed the turn off and used GPS to locate the junction, a very narrow track was found on the corner of the trail heading off to the right, a cairn showed the junction but was small and slightly hidden, the path small but worn, overgrown and worthwhile wearing pants rather than shorts of which I chose the latter, legs being scratched by the bushes, up we climbed, slow, steady and upward the track led, rough in places, a bit of scrambling and finally up on the ridge where the track flattened out a bit, still some bushes scratching my poor legs but nipped in and out of them as nimbly as I could, trees were sculpted by the wind, branches twisted and twirled, wild flowers brightened up the deep green grass and sporadic rocks and up we continued until the base of the final ascent, we scrambled up rocks, climbed and made our way to the summit a large pillar had a trig marker on top, views as far as the eye could see, off to the south west Mt Kosciuszko and Mt Townsend way down on the horizon, blue sky as far as we could see, beautiful warm sunshine made a quick turnaround impossible, photos and some banter before a laze in the grass and warm sunshine, finally headed back down the same track and back to our hut for dinner, the hut bathed in late afternoon sunshine was warm inside and no pot belly stove was require tonight, the sun setting around 8:30pm with glorious clouds lit up in a variety of colours. 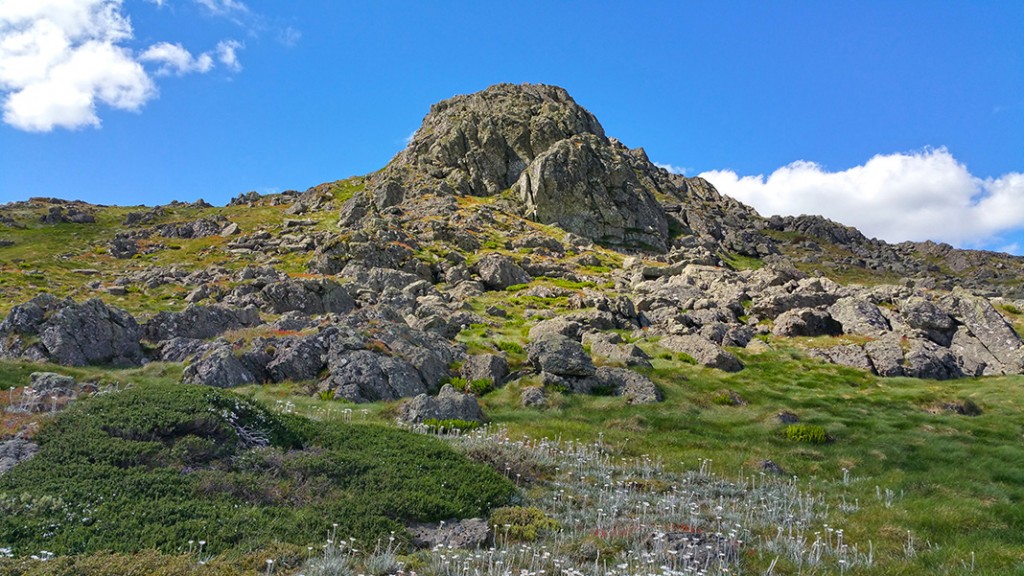 The next morning was our big walk day, around 18km or so we were hoping for similar conditions as our first day, weather wise it was glorious sunshine however the trail wound up and down through the valleys, we had time on our side so took a few stops in the long grass and shade of the trees, We came across a small shallow river and hopped across the stepping stones, Srini standing on the other side asking Dave can I take a dump? Looking rather bemused I was unsure how to answer only to hear Srini again say Dave I want to take a dump, pointing at the river, I said no but then Srini said I can catch up Dave I will only be a minute or two, before long Srini was down to his underwear and in the river taking a Dunk! Poor Srini did give us a few laughs that night recounting his I want to take a Dump comment and what it actually means… Morning tea the Okeefes Hut, a history lesson in itself, burnt down in 2003 then rebuilt in 2011 inside the walls are papered with old newspapers, some from 1936 with headlines like Lawrence of Arabia “Lawrence wears King Feisal wedding garb, and another Japan Russia tensions escalate, a wonderful hut for a night but we only had morning tea here, table, chairs lovely big stone fireplace, but even though it was inviting set in a lush valley, bathed in sunlight we had to hit the trail again winding up, down through long grass, spring flowers before finally the trail then wound up over a hill and down a steep path to a small river, deep with no stepping stones, Lance and I jumped across two stones whereas the others took off their boots and waded across the cold water, Srini excited to help others across while posing for the camera numerous times before a final play in the water, as it was lunch time we climbed the other side up the hill to a shady treed area to sit and enjoy lunch, after a bit of check and double check with the GPS realised we had missed a turn off the other side of the river!

We finished lunch, packed our backpacks and headed back down to the river, I convinced everyone to use the rocks to the right and hop across which made it all much quicker to cross even with some nervous hesitation before the hop. Up the steep train the other side about 1.5km back we saw the pesky Farm Ridge Trail facing away from the direction of walking and up the trail slightly annoyingly poorly placed and difficult to see, the trail narrower but thick grass and wild flowers, trees now growing close to the edge of the trail closing it in but gloriously soft underfoot, and as we climbed to the top of the ridge finally flattening out making for lovely brisk walking in perfect conditions, several breaks were taken enjoying the sunshine, wildflowers and surrounding views before coming to the end of the ridge line and the steep long trail down to the Tumut River.

The river was flowing deep a few anglers were slightly up river which is about 6 or 7m wide and no bridge/stones to cross, wet feet it was and up, up, up the steep trail the other side, knowing only 2km to our beloved Round Mountain Hut again for a last night in Jagungal, thankfully arriving at our hut, readying the fire to dry off and pitch out tents this time 3 slept inside the hut too tired to pitch tents, the sun was setting, temperature dropping and dinner was very much appreciated knowing we were also lightening our backpacks for the last 2km walk out to our cars. 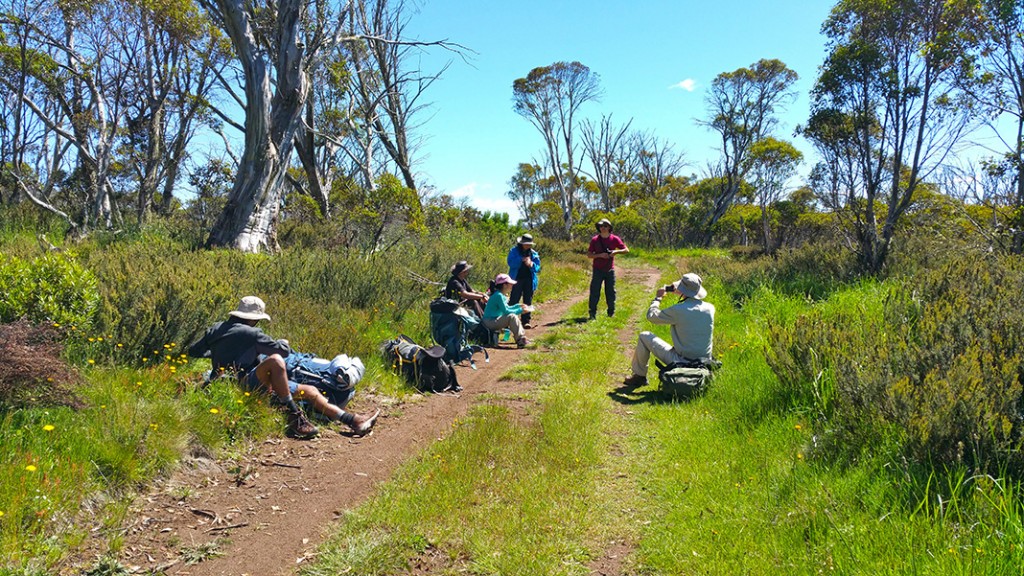 We awoke late for a lazy day, breakfast was taken with sun shining brightly, clouds drifting overhead and packing our bags and readying for the last walk out, some stiff and happy in the knowledge the car was taking them to Cooma for a big burger, later to find out the food factory was closed for Xmas holidays but that did not stop us enjoying a browse around Cooma, fill up with fuel and a drive back to Sydney all over and done until our next Kosciuszko adventure

Jagungal Wilderness area Round Mountain trail 44km medium grade
Directions from Sydney: Head south to either Cooma or Yass then take the Snowy Mountains Hiway B72 to Round Mountail Trail Head
Round Mountain Trail is easy to follow as it’s a fairly wide fire trail, although not often used by vehicles a lovely walking trail, if staying at Round Mountain Hut look for the trail off to the left Farm Ridge Trail its well marked. The Round Mountain Trail runs past Dershkos Hut and onto the Grey Mare Trail, at this junction take the left fork (just past this fork about 700m is the junction for Mt Jugangul ascent (not to be missed) to the right) Grey Mare Trail continues until taking the Farm Ridge Trail on the left, watch out for this turn off as slightly hidden

Note: Always be prepared when bush walking, carry enough water, water purification and adequate food/snacks for your walk, never go without a map, compass, and personal locator beacon, first aid kit & always let someone know where you are going and when you plan to be back. For more information see the NSW National Parks website about staying safe: http://www.nationalparks.nsw.gov.au/safety/bushwalking