What to know before you visit North Korea

As originally posted by Lonely Planet North Korea is a curious but compelling place to visit, and one of the only places in the world where even the most hardcore independent travellers find themselves signing up for a package tour.
The restrictions on what you can see and do are tight, but as the country very slowly continues to open up to the outside world, more and more people are making the journey to a land still living in the Cold War era. Our veteran North Korea author answers the twelve most common questions people ask about travel to this secretive country.

It certainly is. Tourism in North Korea is beginning to boom, and has been going on since the early 1990s, when this most extraordinary and secretive country began very tentatively to open up to foreign travellers. Since then it’s seen a huge expansion, particularly with the growth of the Chinese market, which now provides the single biggest number of visitors by nationality.

Visit North Korea: Is it really hard to get a visa?

No. A visa is all but a formality once you’ve signed up for a tour with one of the dozens of operators offering tours starting and ending in Beijing. Currently only South Koreans are unable to visit. 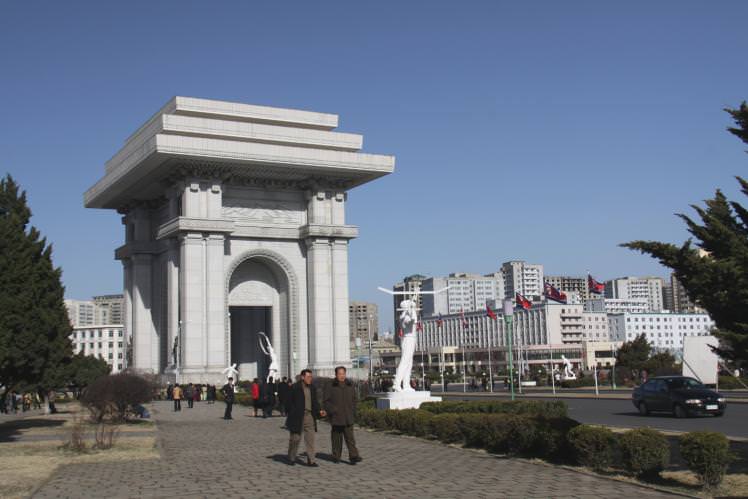 Visit North Korea: Can you can only go on a group tour?

The rule is that you must be escorted at all times outside your hotel by two state-employed tour guides, whether you’re entering the country as part of a big group or plan to do a private tour with just a few travellers, or even totally alone. The advantage of travelling in a group is that the costs are reduced and the sense of being controlled by the guides lessens considerably. On a private tour with just a few friends you’ll find you have far more control over what you see and do, though you’re never far from the guides’ eyes.

The guides are generally very helpful, polite and speak good English. They take their work seriously, and while they tend to be very curious about foreigners, they are also fiercely proud of their own country. You’re very welcome to ask them questions, but it’s best not to broach topics like history or politics – these are sensitive areas, and you’re unlikely to do much but sour your relationship with them in doing so. In general, the best approach is to listen to the guides with an open mind and then discuss your own opinions in private. Take the rules seriously – if you leave the group without permission, it’s the guides who can potentially get in trouble.

Visit North Korea: What’s it like on the tour?

Trips in North Korea pack an enormous amount in: even a four-day trip will allow you to see a surprising amount, and you can expect the days to be long. Breakfast is usually around 8am, the bus leaves by 9am each day – sometimes earlier – and you’ll be given a full program of sights, museums and excursions, with a break for lunch, normally returning to the hotel around 6pm. Most evenings involve an excursion of some kind too, even if it’s just for dinner, and so you’ll usually be back out again from 7-9pm. The evenings tend to be rather social in the hotel bars, where travellers can relax and let off a bit of steam. In many senses North Korea has to be one of the safest places in the world. Recent cases have proven that this is not so if you are travelling there to make a political protest or disseminate religious literature. Really, you have nothing to worry about as a tourist. So long as you obey the laws of the DPRK and do nothing to disrespect the ruling Kim family, you will be fine.

Visit North Korea: Do I have to do anything political that I might not want to?

The one act required of all visitors to North Korea is the laying of flowers as a group before the twin bronze statues of Kim Il-sung and Kim Jong-il at Pyongyang’s Mansudae Grand Monument. This is usually done shortly after arrival in the country, and involves walking up to the statues, one member of the group placing a bunch of flowers at the shrine, and then everyone bowing briefly in unison. It’s pretty painless, though it’s of course not everyone’s cup of tea. Other than this, the only political act is listening to the North Korean version of history without challenging it (the guides rarely welcome your feedback on issues such as who started the Korean War, the presence of labour camps in the country and the habits of its ruling elite). Surprisingly good, and utterly superb compared to what most locals eat, sadly. Despite the recurring problems North Korea has had with food supply, tourists are guaranteed decent meals, and these range from standard Korean fare, such as kimchi, cold noodles, rice and various banchan (small plates) to specialty dishes including duck barbecue and even fresh squid if you’re staying on the coast. In Pyongyang, some foreign foods are also available, including at a popular pizza restaurant. Expect after-dinner karaoke.

There’s a huge amount to see and do in North Korea, even if you find yourself doing things you ordinarily wouldn’t on your travels, such as visiting an ammonia factory or touring a collective farm. Broadly speaking, the grand monuments, museums and other shrines to the Kim family and Juche (the North Korean philosophy of self-reliance) are rather less interesting than the glimpses you get of everyday life while travelling between them. Walking around towns (when it’s allowed), visiting a department store, going bowling: otherwise mundane activities suddenly take on a new meaning when in North Korea. The latter excursions are also the only chances most visitors will have to interact with the locals, however briefly.

Visit North Korea: Is it possible to see the Mass Games?

The Mass Games, an enormous coordinated spectacle of gymnastics, dance and off-the-scale displays of synchronicity performed by school children, are currently on hiatus and will not be running in 2015. It’s expected that they will return in summer 2016, but this has not yet been confirmed. Yes, absolutely. There’s an enormous amount to photograph, and guides are normally quite cooperative about what they’ll allow you to take pictures of. The golden rule is to obey if you’re asked not to take photos, and not to take close-up pictures of locals without asking first.

Yes! Recent changes to rules about bringing mobiles into the country mean that you no longer need to surrender yours at the border. The bad news is that you can’t really use your phone for much other than music and photos once inside North Korea, as roaming and wireless networks remain totally non-existent. It is sometimes possible – though rather expensive – to buy a local SIM card that allows you to use the internet, meaning your Instagram feed can suddenly reach peak levels of weirdness as you travel through North Korea.

Visit North Korea: How can I book my trip?

Easiest way to book your trip to North Korea is simply contact us using the form below we normally reply within 24 hours in most cases sometimes even quicker! Use Discovery Travel for your next trip and experience yourself wonderful customer service and superb prices.