The island of Jejudo is a great example of biodiversity preservation. Almost half of all vascular plants found in Korea and about 200 endemic plant species are found on the island. Furthermore, half of Korea’s endangered and protected wild species inhabit the island. High on the summit of Mount Hallasan, you’ll discover polar plant species that advanced southwards during the Ice Age. Many indigenous species and endangered species inhabit the lower altitudes. Without a doubt, Mount Hallasan is a rich ecological treasure, with 1565 species of plants and 1,179 species of animals. 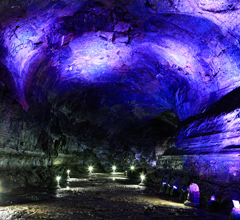 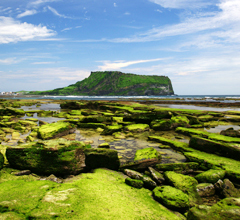 Korea is the kingdom of dolmen (tomb-like structures). It has been reported that around 60,000 dolmens are in existence around the world. One survey found that 29,510 dolmens are located on the Korean peninsula alone, meaning that almost half the world’s dolmens are clustered on one narrow peninsula. A complete survey of Korean dolmens is still being conducted, with researchers hypothesizing that at least 40,000 dolmens exist in Korea.

Dolmens were the final resting places of the ruling class in the Bronze Age. A dolmen was not just a gravesite, it was also used as an altar for rituals. The Bronze Age (from around 2000 to 1500BC) was the period in which humans began settling down and adopted farming instead of leading a nomadic lifestyle. Dolmens became known as a product of the Bronze Age because of the excavation of ancient bronze-ware nearby.

The scale and shape of the dolmens were symbolic of the owner’s power and/or status and therefore shed some light on the social structure of the period. A lot can be learnt from studying the remains buried under each structure. Viewing the dolmens means imagining the daily life of humans 5000 years ago. Dolmens are found throughout Korea, but three of the most characteristic places have been registered as UNESCO world cultural heritage sites in 2000. 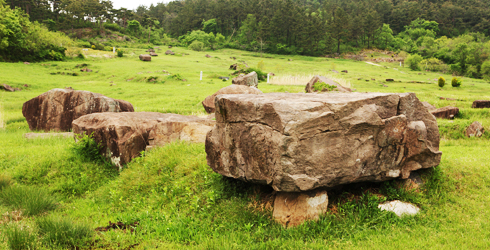 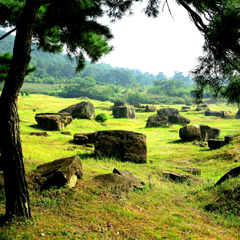 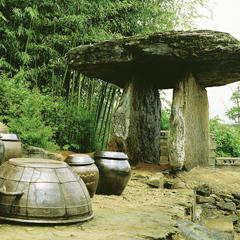 The Shilla dynasty dated from BC 57 to AD 935 and spanned the reign of 56 different kings. During the height of the Shilla Empire in the 8th century, it is estimated that Gyeongju had around 78,936 houses (according to History of the Three Countries or ‘Samgukyousa’ – Korea’s oldest history book). The sheer size of the town along with its population of more than 800,000 is one of the factors that sets Gyeongju apart from other ancient civilizations.

There are two main world cultural heritages sites in Gyeongju. One is the Seokguram Grotto and Bulguksa Temple area, regarded as the culmination of Korean Buddhism, and the other is Gyeongju’s historical heritage region, which contains a wealth of artifacts dating back to the Shilla dynasty. Shilla tombs dating back over 150 years are found in the center of Gyeongju. The registration of historical treasures was based on groups, instead of individual artifacts. This was due to the area’s abundance of artifacts. 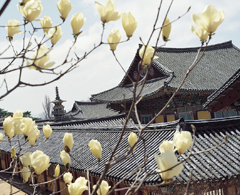 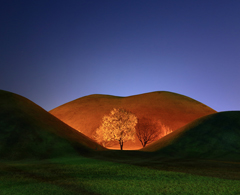 Gyeongju is an ancient city that is highly representative of Korea. It was the capital of the Shilla dynasty for a thousand years from BC 57 to AD 935. The most notable remains in Gyeongju are the Seokguram Grotto and Bulguksa Temple. These monuments capture the essence of Korean history and Buddhist culture and remain a source of intense pride for Koreans everywhere. Seokguram Grotto and Bulguksa Temple are often included when introducing Korea abroad as well as being a part of the mandatory itinerary on field trips taken by Korean students. The Bulguksa Temple even appears in the lyrics of an old folk song that begins with a reference to the ringing of the bell in the Temple.

In 2000, Gyeongju was registered as a UNESCO world cultural heritage site under the title of the Gyeongju Historical Heritage Region, but the famous Seokguram Grotto and Bulguksa Temple are not included under this heading. These sites had been previously registered as UNESCO world cultural heritage sites along with the ancestral shrine of the royal family and the Tripitaka Koreana at Haein Temple in 1995.

On beautiful Mt. Gayasan in Hapcheon-gun, Gyeongsangnam-do, stands Haeisna-one. This is one of the three principle Buddhist temples in Korea. Haeinsa represents the distinguished cultural legacy of Korean Buddhism, with more than 1,200 years of heritage. Having been home to many virtuous priests over the past century, it is also one of ten Avatamsaka educational temples in Korea, known as the first Dharma Jewel Monastery. It was given this title due to the fact that it enshrines the Goryeo Daejanggyeong (Goryeo Dynasty Tripitaka). The Tripitaka (Sanskrit for “Three Baskets”) Koreana holds a collection of printed wood blocks, called the Janggyeong Pan, which are on UNESCO’s World Memory list. The Janggyeong Panjeon is the house that preserves the Tripitaka Koreana, and is listed as a UNESCO World Heritage Site. 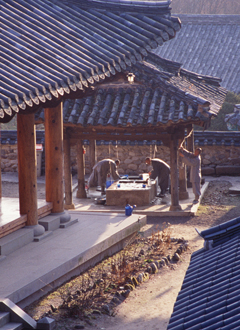 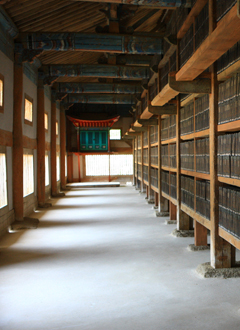 Jongmyo is the royal shrine where the memorial services for the kings and queens of the Joseon Dynasty were performed. The structure represents the greatest religious implications from a Confucian perspective. Since the principal ideology of the Joseon Dynasty was based on Confucianism, the services performed in Jongmyo must also be viewed as an extension of political activities. The value of the shrine does not come from the structure itself, but rather from its historical background. The real value of the Jongmyo Shrine is in its excellent preservation of the history of the Joseon Dynasty through its dedication to all the deceased kings and queens over 500 years in one place. As more is learned about the Jongmyo Shrine, more values are discovered to justify the legitimacy of it as one of most precious national monuments in Korea

The primary palace of the Joseon Dynasty was Gyeongbokgung palace. Overlooking Sejong-ro, Seoul’s main street, its grand, majestic features rightfully have become a symbol of the prestigious Joseon Dynasty. Changdeokgung, Changgyeonggung, Deoksugung, and Gyeonghuigung palaces were all subsidiary palaces located inside the capital of the Joseon Dynasty. These palaces served as residences for the royal family in case Gyeongbokgung Palace was undergoing routine repairs or was damaged by fire. Unlike the main Gyeongbokgung palace, the simple, unimposing style of Changdeokgung Palace is neither majestic nor grandiose.

Changdeokgung Palace was and is regarded as a quintessential example of Korean style, which is part of the reason it was so highly favored by the Joseon kings. The palace is listed as a UNESCO World Cultural Heritage site for its historical significance, simplicity and subtleness. The UNESCO committee described the site as an outstanding example of Far Eastern palace architecture and garden design. The UNESCO committee also stated that the design of the palace was exceptional because the buildings exist in harmony with the natural environment.

Within the forty royal tombs of the Joseon Dynasty are interred 27 kings, queens, and those monarchs that were posthumously granted the title of king or queen. The tombs date from the time of the dynasty’s foundation in 1392 until its fall in 1910. Of all the royal tombs of Korea’s past dynasties, the tombs of the Joseon Dynasty are in the best condition. In fact, rarely have royal dynastic tombs worldwide been so well preserved in their entirety.

When the royal tombs were constructed, man-made facilities were kept to a minimum in order not to damage or interfere with the natural surroundings. The design of these tombs was carefully planned, so that various ancestral ceremonies and rituals could be performed there on a regular basis.

Although there are numerous historical villages in Korea, the most representative are “clan villages.” In Korea, a clan is a social group comprised of people of the same paternal line, family name, and ancestral home; it also includes women who have entered into the clan by marriage. Consequently, the term “clan village” refers to a village in which one or two clans form the majority of the village’s residents and play a central role in making decisions about village life.

Hahoe and Yandong face outward towards quietly flowing river waters and are guarded by forested mountains at the rear. Long ago, each village was constructed with sensitivity to the unique mountain and waterside climate. Built not only to withstand temperature and humidity changes throughout the year, village houses, pavilions, study halls, and Confucian academies were specially constructed and arranged so as not to violate Confucian etiquette and the principles of Feng shui.

The Suwon Hwaseong Fortress was the world’s first planned city. The Hwaseong Fortress is regarded as having been more thoroughly and systematically designed than comparable structures of its time, including those in Saint Petersburg, Russia or Washington, D.C. in the United States.

The Hwaseong Fortress stands as a testament to the advancements in technical theories and applications made during the Joseon Dynasty. An enormous of money and manpower was used in the project, on a scale of unprecedented in magnitude in the history of the Joseon Dynasty. It was an immense civil engineering project, which could not have been initiated and completed without King Jeongjo’s unique determination. 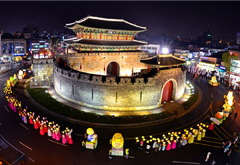 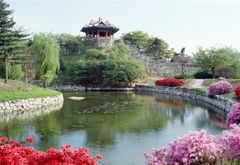 Namhansanseong was designed as an emergency capital for the Joseon dynasty (1392–1910), in a mountainous site 25 km south-east of Seoul. Built and defended by Buddhist monk-soldiers, it could accommodate 4,000 people and fulfilled important administrative and military functions. Its earliest remains date from the 7th century, but it was rebuilt several times, notably in the early 17th century in anticipation of an attack from the Sino-Manchu Qing dynasty.

The city embodies a synthesis of the defensive military engineering concepts of the period, based on Chinese and Japanese influences, and changes in the art of fortification following the introduction from the West of weapons using gunpowder. A city that has always been inhabited, and which was the provincial capital over a long period, it contains evidence of a variety of military, civil and religious buildings and has become a symbol of Korean sovereignty.

Located in the mountainous mid-western region of the Republic of Korea, this property comprises eight archaeological sites dating from 475 to 660 CE, including the Gongsanseong fortress and royal tombs at Songsan-ri related to the capital, Ungjin (present day Gongju), the Busosanseong Fortress and Gwanbuk-ri administrative buildings, the Jeongnimsa Temple, the royal tombs in Neungsan-ri and the Naseong city wall related to the capital, Sabi (now Buyeo), the royal palace at Wanggung-ri and the Mireuksa Temple in Iksan related to the secondary Sabi capital. Together, these sites represent the later period of the Baekje Kingdom – one of the three earliest kingdoms on the Korean peninsula (18 BCE to 660 CE) – during which time they were at the crossroads of considerable technological, religious (Buddhist), cultural and artistic exchanges between the ancient East Asian kingdoms in Korea, China and Japan. 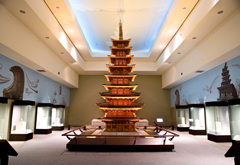 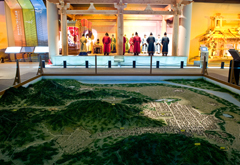